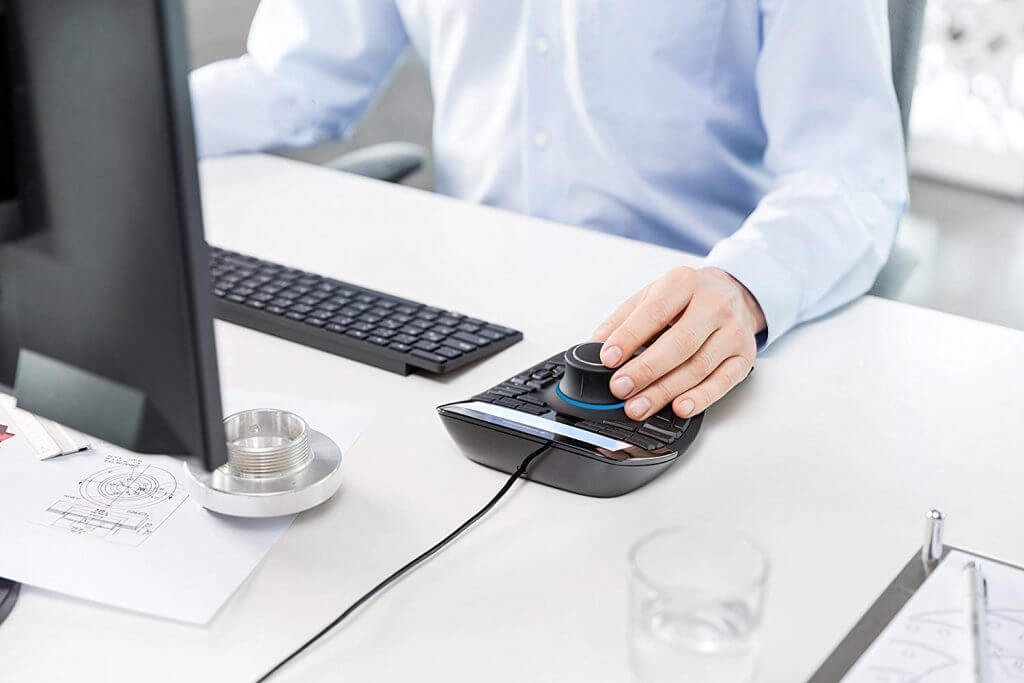 3D technology currently encompasses a vast number of industry sectors and work tools designed for the work of engineers, animators, and architects. The growing demand for 3D prints, after the appearance of three-dimensional desktop printers, has led to the creation of a whole line of products designed to facilitate creative work.

One of those most practical and useful tools to design comfortably and increase productivity is precisely the 3D mouse or CAD mouse, which simplifies the creation and editing of three-dimensional images. The 3D mouse is specially designed for professionals or trainees, who seek to create models in a more accessible and sophisticated way.

Simply use it a couple of times to realize the full potential of this wonderful work tool. In a short period of time, the user can become familiar with the 3D mouse or CAD mouse, since when learning to control the movements of the head and its effects on the model, the learning curve of using the 3D mouse for the first time can be greatly reduced.

Advantages and utilities of the 3D Mouse or CAD mouse.

In the CAD world, for example, most of its applications work with a traditional mouse that contains a scroll wheel to zoom, a central button to scroll and the keyboard used to move the views to a certain plane. It is an extremely demanding job for the hand and especially for the fingers, after hours and hours of dedicated work. The pain generated by the continuous and prolonged use of the central button is one of the most damaging effects of traditional mice, especially when using complicated 3D modeling software other than SolidFace.

Well, the 3D mouse simplifies and facilitates this problem, as it allows the designer to work with both hands. Have the zoom and pan control on one side and on the other handle the remaining commands. In addition, it abbreviates work by using shortcuts and eliminating the need to have to use the keyboard to perform a specific function. Not to mention that the 3D mouse buttons are programmable. This results in the user spending less time on the designs and working with greater efficiency and productivity.

The 3D mouse works with all 3D modeling software on the market, including SolidFace. Among its many features and utilities are its versatility and comfort:

The 3D mouse allows the designer to move, push, enlarge or rotate the image of the model as if we’re holding it in their hand. In such a way that the user can with one hand manage the 3D mouse or CAD mouse to navigate and move around the prototype environment; Meanwhile with the other, use the conventional mouse simultaneously to select, edit or create. This will make you focus more on the design and can better understand your model as you can see it from all angles.

The core of the 3D mouse is the control head that with a little practice becomes very easy to handle. With the 3D mouse engineers, animators or architects do more with less, reducing the risk of work injuries from repetitive movements caused by traditional mice. In addition, the 3D mouse is more comfortable because of its ergonomic shape that adapts perfectly to the hand and enriches the three-dimensional experience due to the many functions it has incorporated.

Differences with the conventional mouse

The traditional mouse can only move the cursor to select menu items. Its main difference is that with the 3D mouse you can move the model as you wish. On the other hand, with the traditional mouse, the movement or navigation is limited to one movement at a time, making creative work more cumbersome. Instead, the 3D mouse contains configurable buttons, according to the designer’s needs, and the type of model it requires.

It is possible to configure the speed with which the model rotates as well as the way we want the movements to be made. For example, if we want the zoom to be tilting the head down or moving it forward. Also, movements to the sides to rotate the model, either to the right or to the left or to both sides.

The control head can move in six different axes. Perhaps the movement to the right and left along with the zoom may require more user practice because it involves moving the head in parallel to the table, but this is something that with a little practice you get to master perfectly.

When moving back and forth, the model can be reduced or increased (zoomed in). Although the head should not be tilted at the same time, because doing so will also move the model while zooming. The same happens when the head moves sideways. The model moves to the right and to the left but when tilting the head this will rotate.

To move the model up or down, it is very simple, just raise or lower the head. In the 3D mouse, it is also possible to use only one axis at a time, but many people like to use all the axes at the same time.

Soon you will see how you will be fully familiar with its use. After living the experience of using the 3D mouse, you will wonder how I could work before without this fabulous design tool that helps us solve creative work in the easiest way with its versatile movements.

This is an urban legend, because in reality after a few days of practice you will see how you get familiar and used to use the 3D mouse in your designs. It is true that some input technologies can cause us some apprehension, but after using them correctly those fears disappear.

In the beginning, for example, some users of the 3D spindle mice may have difficulty orienting themselves by the round shape of the spindle, because they cannot determine which side is up or down. Also to locate and use the buttons that are around the disc or the ways in which the disc can move. But these are things that with daily use become completely mastered and when we get used we find it very easy.

All current CAD software makes the design process easier by allowing us to use shortcut keys. For this, it is advisable to have a 3D mouse with built-in customizable keys. Although the user can continue using the keyboard for these functions if it prefers. You can also save time in the creative process if you decide to change for customizable keys. The fundamental thing in the use of the 3D mouse or CAD mouse for CAD that must be kept in mind is that this tool will allow you to interact more with the 3D model instead of the software.

3D mice have DPI / CPI to measure their movement accuracy just like conventional mice. Some of them have a built-in 6 degree of freedom (6DoF) sensor that can detect minimum inputs. All motion sensors are manufactured with infrared optical technology. Like conventional mice, there are wired or wireless 3D mice; so select the one you prefer according to your work environment.

There are different companies that manufacture 3D mice, but the3Dconnexion models are by far the most in-demand and successful in the market. So we will only refer in this article to the versions presented by this company. The four 3D mouse models of 3Dconnexion that we present below are considered the best for CAD professionals. To the point that NASA itself uses them in its delicate operations, due to its precision.

The 3 versions of this mouse: SpaceNavigator, SpaceNavigator for laptops and SpaceMouse Wireless, are quite similar and only differ in certain features. They have software that serves to open an integrated radial menu with four buttons or eight sections. Its 6-degree freedom sensor (6DoF) with its own patent is designed for the user to manipulate digital content and various CAD applications. As the manufacturer indicates, this mouse allows “precise and intuitive 3D navigation”.

The 3Dconnexion SpaceNavigator model comes with a rubber head only and a heavy base that allows you to better support your hand and keep the mouse fixed on the worktable surface. It can be used simultaneously with the conventional mouse.

While the user manipulates its drawing by pushing, pulling, turning or tilting the head, which allows him to scroll, intuitively rotate the model and zoom, with the other hand can select other functions of the SolidFace software to select or edit what he is working.

The product software offers many customization features for users to adapt the mouse to their needs. Even the SpaceNavogator laptop mouse comes with a protective travel case provided.

It has two versions (Spacemouse Pro and Spacemouse Pro Wireless) whose only difference between them is only connected because one is wireless and the other is not. Both mice come with an ergonomically designed palm rest with 15 programmable keys. The keyboard modifiers provide the user with easy access to the Control, Alt, Shift and Esc functions, which saves time because it reduces hand movement to the keyboard.

QuickView keys give access to 12 views that are activated with the fingertips and allow rotation to be disabled when working in drawing mode. Likewise, you can activate a numeric keypad on the screen without having to do it through the computer keyboard.

This 3D mouse model adds another 10 customizable commands to the previous models to meet all user needs. It allows restricting the movements of the controller cover to any required axis. Four more commands are also added to QuickView Keys to allow views of the drawing from all six directions, including the isometric view.

Its main feature is the LCD screen that serves as a workflow assistant to allow the user to read notifications that arrive without being distracted. In the function key applet, the commands assigned to each of the smart function keys are also shown.

This product includes function key profiles available in various types of software, including SolidFace. As well as see the properties of the created model, that is, date and time of creation, file size, last edition of the file, as well as other properties of the 3D model such as mass, density, and volume which makes it very practical.

This model combines all the best of SpaceMouse Pro and SpacePilot Pro mice in terms of style and power and incorporates them to offer greater versatility and usability to users. Therefore, it is the most advanced option of all those mentioned above. The SpaceMouse Enterprise facilitates access to standard and customized views and also has a 6-degree freedom (6DoF) sensor.

The controller cover allows 3D navigation to be very smooth and intuitive, and just by pressing a finger the model can be adjusted to the standard view that the user chooses. This mouse comes with three custom view keys, to get a unique 3D navigation experience. It is possible to obtain superior performance in creative work.

The four 3D mouse models of 3Dconnexion are extremely useful to work tools to improve performance and facilitate the work of the 3D engineer, architect or animator. It all depends on how the user expects to increase their productivity and, of course, the work environment they have. Not forgetting the price of each of them, justified by others, because they are very powerful tools designed with great dedication.

These models are also sold accompanied by a conventional CAD mouse manufactured by 3Dconnexion to complement the work. References about its physical benefits for the user indicate that these products significantly reduce hand pain by up to 77% and eliminate muscle fatigue by 65%, compared to a traditional mouse. So, the reasons for acquiring one of these are leftover.