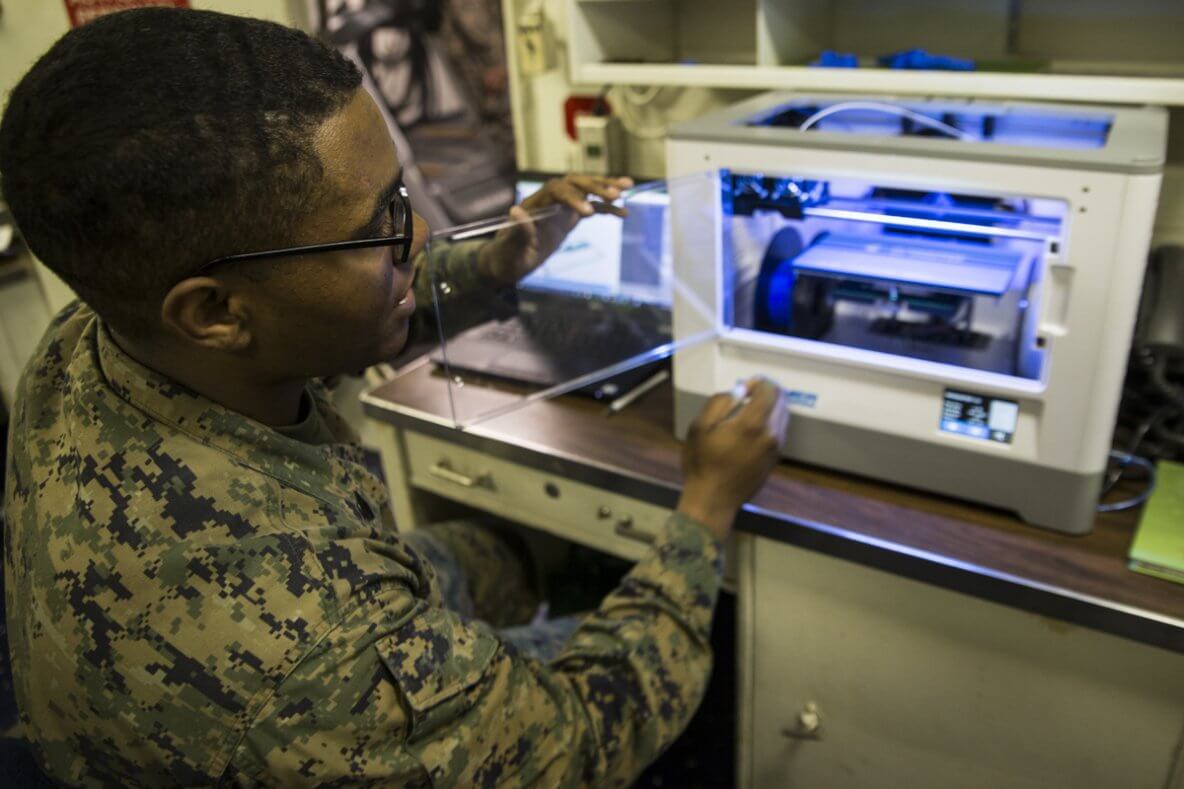 Since the born of Additive Manufacturing Processes in the last century, newer and better techniques have appeared to give people more ways to materialize their ideas. Nowadays even metal 3D printing is a well-defined process and surely the future of manufacturing metal parts, thanks to the complex geometries achievable by this technology. Because of all this, the range for 3D printing applications is seen today in any industry. What it was once a project just for creating new ways of manufacture, has become today a tool *That will be indispensable in the future* for the development in any industry, such as the Fashion Industry, High precision medical industry, Aerospace industry and of course, Military Industry. 3D Printing Military Applications are no surprise since the combat field requires the development of faster and safer ways to engage and accomplish the missions. In this article, we will review some of the reported applications in the Military Industry.

The need to have a physical infrastructure inside the military context is no surprise at all. We know that militaries have headquarters inside their “jurisdiction zone”, by example, US militaries have headquarters inside the US territory. But going a little bit further, while in combat, the military has the need to build reliable and fast infrastructures to quickly build refugees or barracks to settle troops in strategic points. This need has developed the interest of the military sector to research further inside 3D printing technology in the construction process.

In order to take advantage of this technology, in the United States, The Marine Corps System Command created a special team, the Additive Manufacturing Team. This team has found a way to use 3D printing technology in the task of creating physical infrastructure for military use. Last Year, they teamed up with Marines from the I Marine Expeditionary Force, and take advantage of concrete 3D printing to build on-site a 500-square-foot barracks hut in only 40 hours, a task that normally took five days to 10 marines to achieve according to their own report.

In January 2019, the Additive Manufacturing of the MCSC teamed up with Marines from the 1st Marine Logistics Group at Camp Pendleton, California to 3D print an on-site reinforced concrete bridge. To accomplish this task they developed an Automated Construction of Expeditionary Structures (ACES) printer that will probably be used as part of regular equipment for military teams in the future. And the MCSC keeps pushing further, more recently in August 2019, this corp along with the 7th Engineer Support Battalion managed to print a concrete structure with a 3D printer three-inch nozzle, when they usually used two-inch nozzles for their testing. The structure they build this time was a bunker designed by the Engineer Battalion, In the future, they plan to increase their testing capacities to a four-inches nozzle for concrete 3D printing in the construction area.

Military Accessories and parts for Soldiers and Transport.

3d printing applications for military purposes is not limited to physical infrastructures and buildings. For soldiers in the battlefield or any mission assigned comes with challenges, and by using 3D printing technology, Military Corps seeks to achieve the safest, fastest, or better ways to accomplish the mission, depending on their needs. One example can be found in missions that have to be accomplished in places where snow is a crucial factor. Normally, snowshoe clips are needed to accomplish the mission, but if in the middle of the mission, the clip breaks, the mission can be compromised. The AM team again brought a solution for this problem, it is 3D printed Snowshoe Clip. They managed to 3D print these snowshoe clips for 5 cents each.

The applications for the military equipment does not stop on snowshoe clips. The same report talks about the design of 3D printed insulated radio cover. What was the problem they wanted to solve? These radios used Lithium-Ion Batteries, and they died quickly when used in cold places. This 3D solution looked to keep the battery warmer and give it a longer life during missions in this kind of environment. The same team has reported also that they have successfully developed and test a stainless-steel 3D printed Impeller used in the M1A1 Abrams tank model. The model was tested for over 100 hours this year, and they are expecting to have operative for real-life applications soon. This impeller can be created in less than a week!! A clear way of taking advantage of the metal 3D printing capacities of AM technology to have the upper hand on the battlefield.

3D printing technology has found its way into the military field. As reviewed in this article, we have seen how it can be used to improve some aspects of military life in combat. This review has been only a quick picture of all the capacities of AM processes in military applications. Keeping an eye on the news related to the military industry could be really helpful for designers and engineers of all kinds. Let’s not forget that many civilians applications of today have born from military applications, so ideas from the military world can be projected into civilian life. One example could be using 3D concrete printers to find new ways to build cheaper and reliable civilian houses.    Inside all this debate, one thing is clear, you will always need a 3D Modeling software that can cope with this technology. And making a quick parenthesis, SolidFace is the 3D modeling software with 3D printing compatibility that will help in any project you work on. Solidface also offers a collaborative and cloud-based technology to boost your team progress in any project where 3D printed technology is required -or not-. Going back, Additive Manufacturing Processes has shown one more time the capacities that can be achieved by using it, and we surely will keep an eye open to see how it will keep ourselves amaze.