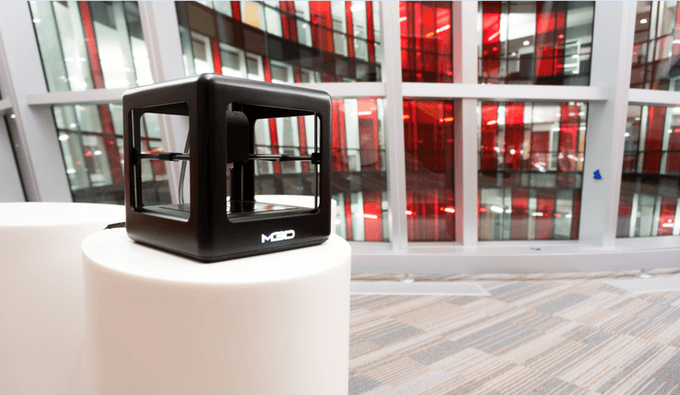 If you’ve been paying attention to the world of 3D printers, then you must have noticed that the competition between consumer 3D printers is at an all-time high, and just like the M3D Micro, most 3D printers have drastically lowered their prices so they can win the attention of first-time users. And if you think about it, that’s a whole lot of people.

If you love 3D printing and seriously want to get in on it, one of the best places to start is with the Micro 3D printer, M3D, a printer that makes 3D printing available to the average family by offering it in the most accessible way possible.

Now, the first thing that comes to mind when you run into a really low priced printer is a simple check whether you’re getting shortchanged in any way possible, and you’re right to feel that way because we all know that, for now, no 3D printer is perfect; each one comes with its good points and areas where it’s still in need of improvement.

That said, let’s review the M3D Micro printer, and get a feel of its performance and worth. Is the M3D printer a great model? Can it meet your printing need and that of your family as well, we’d find out below, but first, let’s gain a little footing in understanding the M3D LLC and the M3D Micro printer.

Although founded in 2013, M3D LLC entered the 3D printing industry in 2016 with their printer M3D Pro. This introduction marked their entrance into the 3D consumer market by releasing a cheap, simple, small, and low power consuming printer. Since then the company has gone on to release its very own large-format 3D printer, the Promega, which has a 15.3” print volume and features a compound print head that allows it to print two filaments at once.

M3D’s Micro, as we’ve stated earlier, is a small, open cube that weighs about 2.2 pounds. The printer is very easy to set up; after unboxing, you can easily calibrate the print head through the Micro’s software, and because the printer doesn’t have a power button or any type of controls for that matter, all you have to do after calibrating is simply plug in the printer’s USB to your computer and you’re good to go.

Design and Features of the M3D Micro

The M3D Micro has a small frame of 7.3-inch, made from lightweight plastic, but that doesn’t hinder it from being able to print large models up to 85 cubic inches, although it might not seem like much, for its size, that’s a lot of print volume.

The Micro’s filament spool fits right inside the Micro in a small compartment below the print bed, further enhancing its simplicity, but you could also use an external filament by attaching a spool holder to the outer frame of the printer.

And if you choose not to use the external filament spool holder, the only part of the printer that sticks out of the cube is the print tube that feeds the print filament from the heel through the back of the printer’s frame and into the print head.

The printer, in general, is controlled by the M3D’s free downloadable app for either Mac or Windows. The app is easy to use but only allows its users to move and scale the model without altering the design. So before using the app, you’d need to have already designed the model with a CAD software, and when it comes to creating great CAD models, SolidFace is one of the fastest and easiest ways to get it done.

The app also allows you to select your desired print quality and density of the model to be printed. Print resolution varies from Ultra-low, at 350 microns, to Expert, 50 microns. It’s important to note that the higher the resolution, the longer the model takes to print, also, the thicker the infill, the longer it also takes to print, so you need to find the perfect balance that works for you.

The M3D printer comes with:

What Does The M3D Micro Print

Like we said earlier, the M3D Micro can print several filaments like Nylon, PLA, ABS, and other materials. After testing, we must say the printer produced fairly decent prints with other types of materials, but it seemed to work best with PLA, allowing us to print larger material that didn’t warp as they cooled or failed.

Particularly, it was some trouble when it came to printing ABS. For one, ABS is tougher than most material and warped very easily. A few times during the printing process, the ABS didn’t stick to the print bed, causing it to fail when the print bed was lifted.

M3D has successfully introduced an ABS filament, the Chameleon PLA. Its color changes depending on the temperature of the print head. The primary limitation to this being that it’s rather expensive when compared to other third-party filaments.

Thankfully, M3D doesn’t restrict you to buying your filaments from them alone. The M3D Micro would still perform well on any third party 1.75-mm filament, although you’d need an external spool holder to hold the new filament because it’d need to be fed directly into the print head, resulting in an unappealing look when compared to the M3D’s hidden filament chamber.

What to Expect While Using the M3D Micro

One thing the M3D has working on its side is its cheap pricing strategy. The printer costs just $350, although you can also get one with filaments and a one-year warranty on Amazon for $450. Granted, $450 may not be so small to some people, but for 3D printers, it’s almost a giveaway.

Just like several printers in the market, the M3D Micro is built to use its own filaments. Nonetheless, other third party filaments still work perfectly well with the printer and as we discussed earlier, it prints different types of filaments.

The M3D printer produced a few decent print jobs, but most of the time, the print result suffered from quality issues. Besides the fact that the printer usually left lumps of print materials on the edges of the print model, the printer also left a lot of whiskers, strings, on the model, and in some cases, unnecessary patterns appeared on the surface of the printed model.

Generally, the print model is acceptable, but when it comes to top-notch quality, the M3D just isn’t there. To crown it all, the printer not only has to be connected to your computer at all times, but your computer itself would need to be awake at all times because if it sleeps, the print job will be terminated, and if the printing software is closed at any point before the print is complete, the job would also fail.

Unlike many 3D printers out there that don’t need constant access to your computer to keep printing, the M3D Micro would literally hold your system throughout the long and slow duration of its printing.

Although it didn’t happen often, one reason why our printed jobs failed was that the print head often jammed. This jamming usually occurred whenever molten print material gets stuck, and blocks the nozzle of the print head. The sad part was that the M3D didn’t notice when its nozzle was clogged and just kept on moving.

With the M3D glitching as it did and the print head occasionally jamming, it didn’t surprise us when the accuracy of each model we ended up printing either appeared larger or smaller than the original CAD model.

When we started a print job with the M3D Micro, we noticed that although a progress bar was displayed on the screen of the app, it never told us the exact time the print job would be completed, and it ended up taking a lot more time than we’d expected.

The Micro is one of the slowest printers out there. It took remarkably long, more than double the time, to produce a print job. And when it finally did, the result was below standard.

But despite its slow print time, the M3D Micro is a really quiet printer, all thanks to its lightweight plastic exterior, it hardly made any noise while printing, and because the printer isn’t enclosed, you’d get the smell of molten print material throughout the print hours.

Heated beds are necessary to improve the print quality by helping the 3D printed material remain warp-free. Despite the fact that heated beds are crucial to great prints, mostly with ABS, the M3D printer doesn’t come with a heated bed, so the printer has no possible way of keeping the printer bed hot enough for the molten print material to stick without warping.

And even with its BuildTak print bed, which doesn’t work well for ABS, we still weren’t satisfied because the models we printed were still warped, and the patterns from the BuildTak always ends up getting transferred to the base of the model.

Thankfully, you can order a heated bed separately from M3D LLC, but even this comes with its own issues. For one, it would require that you plug it to a separate power supply and not the printer. Plus, there’s no way to automatically regulate the temperature of the heated bed, so you might end up with a heated bed that’s either too hot or cold for the print material in question.

The M3D Micro’s support team is very weak and unresponsive and took too long to attend to us when we needed help in sorting out the incessant printer glitches we endured while testing. The sad part is that the M3D had a very strong and passionate support team, but along the line, it all fell apart.

For those new to 3D printing, the inferior support standard of M3D’s support would do more harm than good if you run into any issues with your printer.

The M3D is a small compact printer that won’t drill a hole through your savings if you want to own one. It’s a great purchase for anyone, even kids, who’d just discovered their love for 3D printing.

So, if you’re willing to ignore the fact that this printer is incredibly slow, more likely to run into problems than other printers we’ve tested, and M3D’s unreliable tech support team, then the M3D Micro is going to be a great option for you.