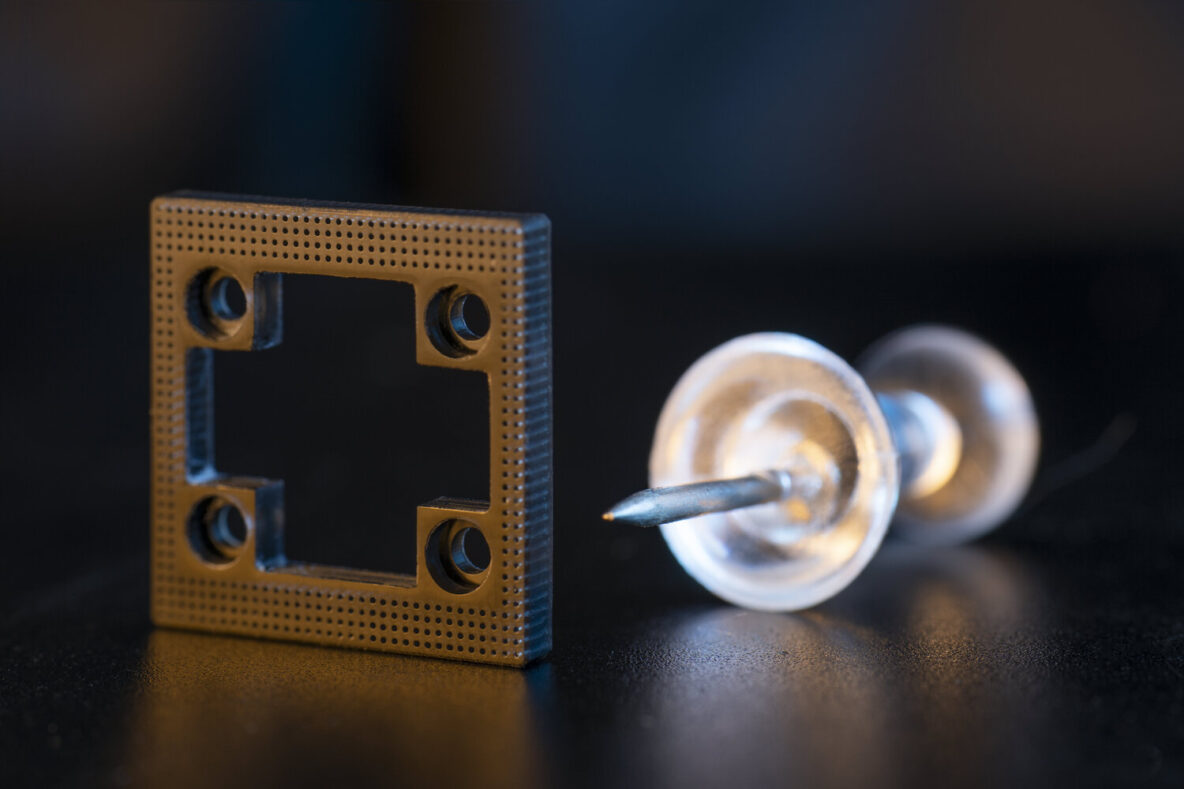 When you hear 3D printing, you probably remember seeing news about 3D printed cars, robots, and even houses. But what most people don’t realize is that we will soon have 3D printed objects in the palm of our hands every day. That’s because micro 3D printing is gaining more and more space in the 3D printing industry, mostly around electronics. Our smartphones and electric devices keep getting smaller, and the pieces inside of them even tinier.

The thing is that the tiny parts inside our electronics, even if not much in size, are very hard to be made since they need more precision and attention to detail. That’s called “miniaturization”, which as the name says, is the practice of making smaller manufacturing parts, them being mechanical, optical, electronic, or even medical devices.

And until micro 3D printing came along, these kinds of pieces were believed to be out-of-reach to additive manufacture, exactly because of the complexity brought by the size. That’s mostly because regular 3D printers don’t have a high enough resolution or the proper materials to design a perfect piece in nano size.

The only way to reach the closest thing to a well-done micro 3D piece was through micromachining or micro injection molding. For all those reasons, the making of tiny parts was known to be time-consuming and expensive in the industrial and electronic fields.

But what exactly is micro 3D printing, and why is it making manufacturing easier and better? Let’s understand how this new technology works.

Microscaled 3D printing comes from a technology called stereolithography (SLA), which is aimed at 3D printing and consists of producing parts layer by layer using a photochemical mechanism. What happens is every light causes chemical monomers and oligomers to collide and form polymers, which create a three-dimensional solid body.

For 3D micro printing, the technology used is microstereolithography based on SLA, but an improved version. Bringing better results and a resolution that goes up to a couple of micrometers, the process of producing is through ultraviolet light.

Each process is different and depends on the UV light source (laser beam or DLP projector), system layout, and special features that define resolution reach and tolerances.

There are two main kinds of micro 3D printers available on the market right now. Current industrial printers have a slower speed of linear path processes. The new laser-based ones can reach a sub-micron resolution that goes up to two-photon lithography. This kind of process typically has 3 mm2/h, limiting it to only producing nano-sized objects in R&D applications.

DLP projector-based processes are preferred when it comes to industrial applications like rapid prototyping of miniaturized medical and electronic devices. That is because this kind of projector has larger reliability and the ability to print objects in a much more quick way. Unlike the laser-based one, DLP creates each layer in a single step, even if it has a smaller pattern size or is more complex.

And why does it make manufacturing easier? For a long time, traditional additive manufacture got stuck when the parts needed to be smaller. That happens because the costs of the making of tiny parts were huge and took way more time.

But the thing is, even if you had the time and the money, the pieces ended up losing quality as they got smaller. That is because the technology didn’t allow precision and accuracy in the development of micro-pieces. As a whole, this has been a huge problem in the industry since it caused blockage for innovation and expansion of business.

Microstereolithography, on the other hand, came along to save the day. Supporting micro 3D printing with much more advanced technology, it can produce high-precise micro-sized parts as tiny as they need to be, in a cheaper, faster way. With that, barriers will be broken down in additive manufacturing, enabling new industries to come along, sparking innovation in existing companies, and just making it possible for those who are traditionally left out to join the party.

In the manufacturing field, just like many others, the key is go-to-market time. Being able to launch a product faster, more personalized, and in a cheaper, simpler way than your competitors is a clear advantage.

Micro 3D printing puts your company at least three weeks ahead of the competition that uses other technologies to develop tiny parts. That’s because injection molding takes 4 to 12 weeks, micromachining weeks to months, while micro 3D printing takes just a few days.

An important name inside this innovation is Nicholas Fang, MTI Professor who co-founded Boston Micro Fabrication (BMF) in 2016. With the intention to improve the resolution and precision of 3D printing, BMF is a startup that used the new optical focus method to manufacture ultra-precise printers.

Fang has been an FTI faculty member for the past 10 years and has been studying properties of light and microfabrication for an additional 10. With that, the professor created a machine that allows companies to print what they can’t mold, plus use small and complex geometries to create entirely new parts with new functions.

Using special lens, BMF has an approach called Digital Light Process (DLP), which consists of flashing a light from a projector to cure materials exposed to it. The lens helps to focus the projected light on a smaller scale, which is perfect for micro-sized pieces.

Besides that, another great feature that set BMF ahead was the development of a control system and software design that accurately moves the printing platform during production.

As Fang explains, the BMF’s approach consists of a process that shares a lot of similarities with regular microscopes. The difference sits in the fact that they deliver a digital picture instead of illuminating uniform light in a microscope.

Boston was a pioneer in micro-stereolithography technology, paving the way, so customers don’t need to order expensive and time-consuming tiny molds for new products and prototypes. The innovation made micro 3D printing cheaper, faster, and more accessible from start to finish.

Generally, the new technology will make it possible for almost all of us to have 3D printed objects in our hands on a daily basis. But where exactly, you ask? Here are the environments where microscale 3D printing can be applied.

Mainly, you will find micro 3D printed pieces in the electronics industry. As mentioned before, in the electronics field, microscaled three-dimensional printing can increase performance and functionality. The best part, it also increases the miniaturization of devices.

One of the hardest challenges in this industry is the fact that, when it comes to innovation, the companies need to create prototypes to new designs very often to test new shapes and functionality. The greatest difficulty comes because they have to send their prototypes to be made outside the company, which takes a longer lead time and costs more money.

The new technology of microstereolithography made it possible for the prototypes to be created in-house. That allows quickness in the process, more flexibility when it comes to design, customization of products (which can lead to better branding), and simplifies the supply chain.

Following this track of thinking, it’s possible to assume that micro 3D printing electronics have a high chance of going from being just a prototyping tool to a mass production process. That’s because the technology is maturing faster, and new merchants come into the market in a high amount. Microstereolithography is a scalable technology that can support high-volume production.

Where can you design micro pieces?

As many may not know, the softwares used to print micro 3D pieces are the same as any other used for other kinds of 3D printings and designs. That is because the process of designing the pieces is basically the same, being able to be achieved through any CAD platform.

In any way, if you’re new to 3D designing or are in need of new softwares, here are 3 recommendations.

Starting with our own, SolidFace is a 2D / 3D parametric historical constructive CAD modeling software. Solidface has 15 years of experience in UniCAD 2D / 3D development, making it a product with powerful 3D visualization, detailing, and parameterization capabilities. You can perfectly read other CAD softwares through DWG, DXF, standard BMP files.

SolidFace automatically creates parametric references for modeling functions that can be edited in a very simple and interactive way, plus it allows the creation of multiple bodies. It is an extremely powerful tool that helps develop dependent parts of a single part file. The software is compatible with 3D printing, integrated into the cloud, and, best of all, it comes with its free version fully downloadable Here.

A CAD software, it is known for its characteristic reach, which includes very familiar features, including native .dwg applications. Generally, it is similar to the 2008 version of AutoCAD and comes with an interface with certain similarities and other features ideal for 2D design and 3D direct modeling.

It is compatible with 3D printing, integrated into the cloud, and, best of all, it comes with its free version fully downloadable Here.

Created by software giant AutoDesk, Fusion 360 is a cloud-based program. It integrates Computer-Aided Drawing (CAD), Computer-Aided Manufacturing (CAM), and Computer-Aided Engineering (CAE) softwares, which makes it a unified platform. Regarding the CAD software, Fusion 360 is a parametric modeling system that allows some powerful tools like 3D rendering and animation. The program runs simulations, fabricates, and renders objects, plus it also provides post-modeling features.

The software, being parametric, assigns a specific dimension to every part you create, which can be changed and adjusted. Fusion 360 makes sure all your objects follow their dimensions surroundings when a model changes based on new parameters. Recently, Fusion 360 added a built-in 3D slicer feature, which allows 3D slicing in the same design program.

A little bit more complicated for beginners, Fusion 360 is suitable for precise and bulky modeling, aimed at intermediate and pro users, and it runs on Windows and macOS. All designs created in the software can be saved on an Autodesk account and accessed from any computer.

Unlike the other ones mentioned, Blender isn’t a CAD program but a proper 3D modeling software. The program is open-source and presents features that handle all types of 3D works, including modeling, animation, texturing, rendering, and VFX. Besides that, it also features compositing and motion tracking, video editing, and 2D animation pipeline.

With a large number of polygons in a single scene, the capacity to map textures over surfaces, and the built-in Cycles and Eevee rendering engines, Blender provides a high-quality visualization. The program is completely free, and you can even make changes to the software’s codebase, adding new features and helping the development and advance of Blender.